In Memory of Marcellus Ward

Ward was killed 25 years ago. His assassination and last dying breaths were caught on tape and haunted the memory of many Baltimore police officers.

At a memorial, held where Ward was killed, Commissioner Bealefeld said that it is "not for us to judge the results of his sacrifice." And certainly a memorial to a slain officer is not the time and place for that.

But at some point we need to ask. Why are we risking our lives? What are we getting in return? If we don't ask these questions, more good men and women will die.

The block Ward give his life to protect has long since died. Like too much of Baltimore, it's vacant, boarded up, and abandoned. Here's the 1800 block of Frederick, odd side: 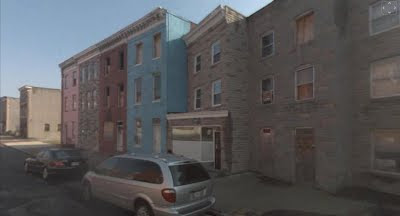 By risking his life to protect others, Ward died a hero. That I do not doubt or forget. But it's hard to imagine that Baltimore or Frederick Avenue would be any worse off today if Ward had simply called in sick that day. And the world would certainly be a better place if Ward and other officers killed in the drug war were still with us. I've said this before (to the consternation of some). I don't want to see any other officers killed for a war we are not and cannot win.

When I put my life on the line every night for the men and women of the Eastern, I would often think about the fallen officers pictured on the walls. Ward always stood out for some reason. (I'm not making it up that his picture hangs in the Eastern, am I?) From what I heard he was a good guy. And from his picture, he just seemed more human than most other cops pictured.

Police Commissioner Bealefeld is a good man and the best commissioner Baltimore City has seen in a long while, certainly better than the previous five commissioners (I'll only vouch for worse commissioners as far back to and including Frazier). Maybe Bealefeld even gets it when he talks about the war on drugs and the "seemingly impossible task" of winning it? Who knows. But the war isn't his to call off.

Here is Peter Hermann's take and his story in the Sun with the sad headline: "At memorial, a new vow to wage war on drugs."