This is part one of a multi-part effort to examine the "facts" presented in the DEA guide to "Speaking Out Against Drug Legalization."

Fact #1 states, "We have made significant progress in fighting drug use and drug trafficking in America. Now is not the time to abandon our efforts."

The data and statistics supporting a fact like this should be accurate and credible. Yet a discrepancy quickly arises. Page four of the document states:

"To put things in perspective, less than 5 percent of the population uses illegal drugs of any kind. Think about that: More than 95 percent of Americans do not use drugs. How could anyone but the most hardened pessimist call this a losing struggle?"

On the next page, the following graph is presented: 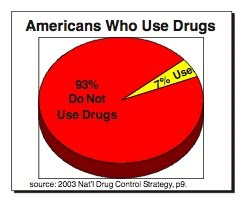 Clearly, this leaves the reader confused as to whether 5% or 7% of Americans use drugs - a difference which would translate into millions of more drug users. This document is six years old, and it's been reviewed by many others, so if I am missing something obvious that makes both statistics valid then please correct me. Interestingly, Josh from AboveTheFlat.com further deconstructs the accuracy of the 95% number and suggests the actual drug use rate is much higher.

From LEAP's perspective, it is misleading to suggest that "now is not the time to abandon our efforts." A shift in drug policy would not mean the effort and energy put into reducing drug use would disappear. The effort from law enforcement would still be there. But it would be focused in a more humane, more productive and less harmful direction.
Posted by David Bratzer