"He does what the governments doesn't do for us"

Jamaica is a rough place. 2.7 million people and 1,500 homicides. That's a higher homicide rate than Baltimore... but lower than Baltimore's Eastern District. It's also dangerous for police, with 5 official line-of-duty deaths per year (though I suspect many more police die in less official ways).

Jamaican police are known to kill a lot of people, probably between 150 and 300 each year. Now that's getting tough on crime! Too bad it doesn't work.

Now I've never been to Jamaica and don't know what I'm talking about. But here's my take: You got the drugs. They're illegal. So you got the drug lords. They got the money. And then you got the government. But they don't do much at all for the poor folk. So the drug lords hand out money and are pretty popular in certain parts. The drug lords are also linked to politics.

As Amnesty International puts it:

Gang leaders use the vacuum left by the absence of the state to control huge aspects of inner city people's lives -- including the collection of "taxes", allocation of jobs, distribution of food and the punishment of those who transgress gang rules.

Police? They're in the middle. They probably don't go into certain neighborhoods and many are bought off. But every now and then police do the right or wrong thing and get caught up in crime or trying to fight crime.

The latest is that police are trying to get a drug lord, Christopher "Dudus" Coke. He's wanted in the U.S. But this "don" isn't going down without a fight. The Harder They Come, baby (I just never get tired of Toots and the Maytals singing "Sweet and Dandy"): A police station torched. Gun battles. Barricades. A government offering to bus people to safety. A Prime Minister saying violence will not be tolerated.

Of course lot of the people will fight for Dudus. Or, as one woman said, "We haffi support all a man like that because him a do what the Government naa do fi wi."

Say what?! As Professor Harriott, political sociologist at the University of the West Indies puts it:

The women would have enumerated those benefits, being safe from rapists, etc. Plus there are other traditional benefits like free light, etc, so there are tangible benefits. ... It is a communal thing and there is a common identity -- one benefits simply by being a member of the group.... There are privileges and obligations, one of which is to protect. If the don makes money and doesn't let off, then the contract is broken. As long as the don upholds his end, there will not be a problem.

Ah, that's my language. I just knew that ivy league education was good for something. But it's not as fun as my girlfriend:

Inna this area we feel safe, because man from outside and even dem whey live ya cyaan come in and rape we.... If any rape a gwaan, a when we go out a road and man try a thing. Up ya so nuh come een like a place like over Seaview [Gardens] where them don't have no don in charge and everybody do as them like. Up ya so we have a one man who run things and when anybody bruk the rules, we report him and the boss deal wid him.

Yesssss. Exactly. Does she know the money is drug money? Of course a little of that goes on... "Lickle a dat gwaan, but dem man dey nuh mek much money offa dem things dey." No they don't.

I want to go to Jamaica. I won't understand a word! 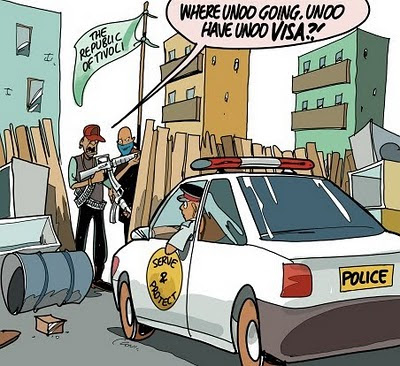 Cartoon from the Jamaica Observer

P.S. Jamaica is not going to win the war on drugs either.
Posted by PCM