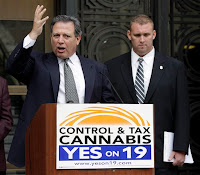 Take a look at just a few examples:


On-the-job experience demonstrated the futility of trying to enforce laws prohibiting the possession and use of small amounts of cannabis, Gray said at a news conference held by Law Enforcement Against Prohibition, a nonprofit organization supporting Proposition 19.

"I was a drug warrior until I saw what was happening in my own courtroom,'' said Gray, a former federal prosecutor.

Associated Press (picked up by over 200 news websites):


Supporters said keeping pot illegal props up drug cartels and overburdens the state's court system. Stephen Downing, former deputy chief for the Los Angeles Police Department, said the nation's drug policy has failed, likening it to cutting off the leg of a spider to cripple it.

"The drug organizations are more like starfish," Downing said during a press conference at a West Hollywood park where children were playing with their parents behind him. "You cut a leg off, it regenerates. We are dealing with a sea of starfish. The only way you kill a starfish is to remove its nutrient. And that nutrient is money."


“This November, Californians finally have a chance to flip the equation and put drug cartels out of business, while restoring public respect for the criminal laws and their enforcement,” said William John Cox, a former sergeant in the Los Angeles Police Department and a Los Angeles County deputy district attorney.


A former police chief of California’s third-largest city said Monday that state voters will have the opportunity “to strike more of a blow than law enforcement ever could against drug cartels” by approving Proposition 19, the measure that would legalize the possession and regulated sales of marijuana.

Joseph McNamara, who headed the San Jose Police Department for 15 years, called the ballot measure a potential “game-changer” that would allow police agencies to devote more resources to fighting other crimes and undercut criminal syndicates that are largely funded by illegal marijuana sales.

“Opponents say we should do more of the same of what has not worked for more than a century,” McNamara said in a phone call with reporters. “I think we should return some common sense to law enforcement by protecting people from crimes they are concerned about. People are not terrified by pot smokers.”

”As criminal justice professionals, we have seen with our own eyes that keeping cannabis illegal damages public safety -- for cannabis consumers and non-consumers alike. We've also seen that prohibition sometimes has tragic consequences for the law enforcers charged with putting their lives on the line to enforce it,” the letter said. “The only groups that benefit from continuing to keep marijuana illegal are the violent gangs and cartels that control its distribution and reap immense profits from it through the black market.”


It was a law enforcement trifecta in support of California's Proposition 19 Monday, with a phalanx of police, prosecutors, and judges coming out in support of the marijuana legalization initiative in a pair of early morning press conferences in Oakland and Los Angeles and a teleconference later in the day for those unable to attend the live events. The endorsements come with Prop 19 in a very tight race and Election Day just seven weeks away.


Pot proponents usually highlight medical reasons to argue for the removal of the illegal tag. Several ex-officials in California turned to a different lens in their support for Proposition 19.

The AP reports that a group of former law enforcement professionals pushed their support for state's marijuana ballot measure on Monday. Largely comprised of former/retired police officers, judges and prosecutors, their endorsement for Prop 19 centers on its ability to aid congestion in the state's courts. Less backlog from petty marijuana cases could lead to more efficient processing for larger-scale crimes.

Again, this is only a small sampling of the extensive print, TV, radio and online coverage we got yesterday.  Please sign the petition to Stand with LEAP and our law enforcers in supporting sensible changes to our marijuana laws.
Posted by LEAP

Email ThisBlogThis!Share to TwitterShare to FacebookShare to Pinterest
Tags: proposition 19