Mass. Decrim Has No Effect On Schools

So say some Massachusetts school officials--the same ones who say decriminalization "sends a terrible message to kids." The story by John Hilliard is here (via the Agitator).

This really is no surprise, but it's important for a few reasons. Prohibitionists seem to care more about "the message" than about actual drug use and drug harms. For too many, it's a moral issue and not a policy issue.

I like to ask those who support the war on drugs if they would support legalization if legalization and regulation decreased drug use. I'd say close to half say "no." Better, they tell me, to keep drugs illegal regardless of drug usage rates. Sometimes increased drug use and overdose deaths can be useful, some drug-warriors even say, for having people overdose in the ghetto sends a powerful “message” to others.

Hmmmmmmm. This sort of ends the debate. So it’s not about drugs. It’s about morals and the power and symbolism of the law.

Take Harry Asslinger (oops, honest typo but much too good to delete)--I mean Harry Anslinger. He was very happy, after failing to maintain alcohol Prohibition, to raise the false alarm about marijuana. 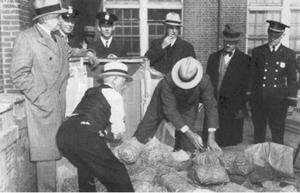 Perhaps Anslinger’s greatest accomplishment was to push marijuana from a fringe drug into the mainstream. That's what happens when you call it the evil weed and highlight the moral turpitude of minorities, immigrants, Catholics, liberals, and other city folk who, like Anslinger believed, were destroying the moral fiber of America.

Whatever. Good or bad, those cool cats sure knew how to party!

In my mind, the debate on drug decriminalization comes down to one main issue: in an era of legal and regulated drugs, would drug use increase or decrease? Of course we can't be sure because we haven't tried it. But the evidence strongly suggests the use would not go up and might go down.

System of liberalization and/or decriminalization result in no increase in drug use. Marijuana usage rates in the Netherlands (where it is publicly sold and legally consumed) are lower than in the U.S. Decriminalization in Portugal has also been a success.

How does this work? Lot's of reasons. Forbidden fruit. Distrust of authority. And consider what Diego Gambetta recently pointed out to me: there’s a lot more pressure in social situations to conform and partake in illegal activities than for comparably legal activities.

If a joint is being passed around, you’re expected, especially in young crowds, to smoke a little. This serves two functions beyond social bonding.

2) You can’t blackmail anybody with your knowledge of illegal behavior since you're guilty too.

There’s a lot more pressure (especially for teenagers) to smoke a joint being passed around than to smoke an offered cigarette. These days cigarettes, regulated and taxed, aren’t even being offered much.

Marijuana decriminalization in Massachusetts has not resulted in a bunch of school kids suddenly discovering the drug and firing up. Hell, the first time I ever saw marijuana was in school, watching a drug deal go down in the bathroom (regulated drugs aren’t sold in school bathrooms). And the best anti-drug lesson I ever got was from the guy who sat behind me in first-period German class. He would also come in late, stoned, and reeking of (tobacco) cigarettes. He never learned any German. But then neither did I.

Email ThisBlogThis!Share to TwitterShare to FacebookShare to Pinterest
Tags: children, cop in the hood, marijuana decriminalization, massachusetts, war on drugs