Book Review: This is Your Country on Drugs

A few days ago I mentioned that if anyone wrote a review of Ryan Grim's new book, I would post it on the blog. Cory Spicer decided to step up to the plate and I am pleased to share his review below. Thanks Cory!

When Ryan Grim wrote a Slate piece in April 2004 about the disappearance of LSD from the recreational drug scene, he envisioned it as a standalone observation of an interesting but mostly trivial phenomenon. However, as reader reaction poured in, Grim realized that he had tapped into an intense interest among the American public regarding drug use, and that much more could be written about the topic. He then began collecting research and outlining what would ultimately become This is Your Country on Drugs: The Secret History of Getting High in America. 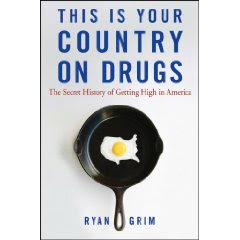 While Grim has spent time advocating for marijuana legalization as a member of Marijuana Policy Project, This is Your Country on Drugs is not centered around advocacy for a given drug policy. Rather, it is a thoroughly interesting study of the historic interplay between the enduring American desire for altered consciousness and the equally enduring efforts to suppress, direct, and control this desire.

From the explosion of narcotics-laced pharmaceuticals in the face of the 19th century alcohol temperance movement to the arrival of designer hallucinogens in the vacuum created by the aforementioned LSD drought, Grim clearly demonstrates what he calls a “balloon effect” with American drug use. When legal or societal pressures put the use of one substance in a negative light, use of other drugs will inevitably increase in a roughly proportional fashion – analogous to squeezing one end of an inflated balloon and pushing the air to the other end. Americans like to get high, according to Grim, and there is little that can be reasonably done to alter this desire or to suppress its indulgence.

Packed with anecdotes, interviews, and statistics, This is Your Country on Drugs is a highly informative read for anyone interested in American drug appetites and the real-world effects of American drug control policy. Crucially, Grim’s approach is not overly clinical, and he freely weaves personal stories and thoughts into his work. The result is an accessible and entertaining read that is also very well-researched and intellectually sound.
Posted by David Bratzer