Attack of the LSD Gummy Bears

The RCMP issued a public warning on Saturday about LSD gummy bears. The story has been picked up by national media in Canada. 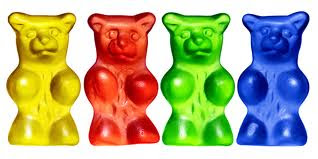 An interesting angle to this is that one could allegedly buy LSD in Cranbrook, a small city in the interior of British Columbia (population 20,000, home of the Canadian Museum of Rail Travel).

LSD is supposed to be relatively scarce these days. Ryan Grim wrote a 2004 piece for Slate titled Who's Got the Acid?

Evidence of acid's decline can be found practically everywhere you look: in the number of emergency room mentions of the drug; in an ongoing federal survey of drug use; in a huge drop in federal arrests; and in anecdotal reports from the field that the once ubiquitous psychedelic is exceedingly difficult to score. In major cities and college towns where LSD was once plentiful, it can't be had at all.

Apparently that's not the case in Cranbrook.
Posted by David Bratzer